Fire safety in buildings is about protecting people, but also limiting economic losses and damage to the building.  Preventing the spread of fire through material and fire dampers is key to this, and early detection of not just temperature rise, but smoke, is crucial to doing this effectively.

In Fire Safety Basics Part one, we saw that fire dampers can play a crucial role in preventing both fire and smoke spreading by dividing a building into several fire cells.

There are two types of fire damper closing system: those with a fuse mechanism and those with an actuator, which is motorised, and to which you can connect a smoke detection system.  There are also two fire classes for dampers: E-class or EI-class.  With E-class dampers, it is necessary to insulate the ducts from fire, which is not necessary with EI-class dampers.

Figure 1 shows typical examples of the two types of fire damper.  On the left is a typical EI-classed fire damper with fusible link, which has insulation material in the casing and a damper blade to prevent heat transfer.  If the air temperature inside the damper reaches 70°C, the damper is closed by a mechanical spring.  Micro switches are used to indicate the position of the damper – either open or closed.

On the right in Figure 1 is a typical EI-classed motorised fire damper, providing the highest level of protection against the spread of both fire and smoke.  A smoke detector and/or other fire alarm system can send a closing signal to the damper.  Two integrated micro switches inside the actuator allow for an automated testing function. 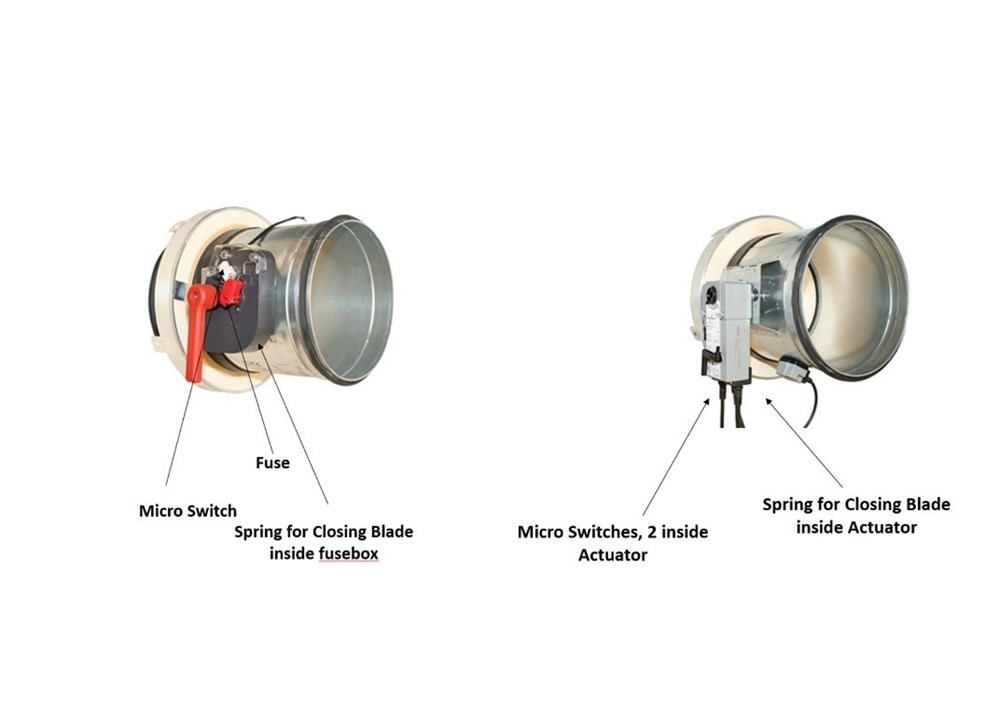 Because by their nature, fire dampers are passive products when there is no fire, normally staying in the open position, the control systems used on motorised dampers are crucial to allow regular and automatic function testing, to ensure that the damper will really close in the event of a fire.

Important aspects of the control system include easy connections for smoke detection, and an automatic damper function test, which indicates the position of the blade (i.e. open or closed).

A typical control system may have many different features, including:

The European test standard for fire dampers is EN1366-2.  Tests are conducted in accredited testing laboratories (Fläkt Woods has its own FINAS-accredited fire laboratory at Toijala, Finland).

The test conditions for this standard include a temperature rise in the oven according to ISO 834-1, and  there must be an overpressure of 300Pa in the oven.

An E-class is determined by the measured leakage throughout the fire test.  The maximum leakage allowed in E-class is 100 litres per second per square metre (l/s/m2), whilst for S-class it is 55 l/s/m2.

EI-class dampers also have to pass a temperature criteria, with the temperature on the cold side not exceeding 180°C.

The European test standard for smoke extract fans is EN12101-3.  This standard includes all parts needed for CE-marking, and they are also conducted in accredited testing laboratories.

Criteria for meeting the standard include that fans must be tested according to the intended usage, an that the airflow must not decrease by more than 10% during the test.  In addition, the static pressure generated must not fall by more than 20% during the test, and in the case of an insulated fan, the temperature increase after a given period must not exceed 180°C.

There are different classes for smoke extract fans, depending on the minimum operating time at a given temperature rise.  The four classes are as follows:

In order to harmonise our offer both inside and outside Europe, Fläkt Woods F300 fans are tested to 300°C for two hours (120 minutes).  This is an enhancement to the EN standard with no knock-on cost to supplying one-hour rated equipment.